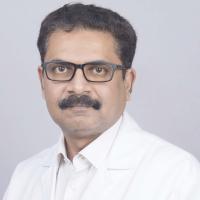 Dr. Sharat Damodar is the Chief of Haematology and Transplant Services at Mazumdar Shaw Medical Centre, Narayana Health City, Bangalore. He is also the Vice Chairman of Oncology Services and Clinical Director of the hospital. He has an immense experience in treating patients with leukaemia, lymphomas and stem cell transplantation. He completed his MBBS from St. John's Medical College, Bangalore and has an MD in Internal Medicine. He underwent training in Haematology and Stem Cell Transplantation in Christian Medical College, Vellore and has multiple papers in peer reviewed journals. Time and again, he has been invited by multiple institutes nationally and internationally for delivering lectures and sharing his experiences. He established the BMT unit in 2004 and is a celebrated Oncologist who has performed more than 1200 Bone Marrow & Stem Cell Transplant and also won Chairman's Award for Best Doctor in 2015.He is a member of multiple committees that devise the guidelines in the hospital.

Posts Held in the past